El Salvador is probably not be at the top of your list for your next vacation.

It is a country better known to most for the ferocious fighting of the civil war years (1980-92) rather than the stunning scenery and generous warm-hearted people.

Repression from a military regime, inequality and poverty all contributed to the organisation of various leftist groups into the FMLN (in English Martí National Liberation Front) named after El Salvadorean revolutionary Farabundo Martí.  A civil war between the FMLN and the US-backed military regime led to more than 75,000 deaths during the war years.

With this violent legacy a  El Salvador remains the least-visited of all Central American countries.  While insecurity, especially gang -related violence is an ongoing problem it is fair to say that things are a whole lot better than they were.  The low number of visitors is certainly not for a lack of natural beauty or historical or cultural interest.

21 years have now passed since the signing of ‘The Chapultepec Peace Accords’ in Mexico City.  The time  to visit this beautiful little nation sometimes referred to  as ‘El pulgarcito de America‘ (The little thumb of America) is here.  My visit in 2011 was fantastic.

If you do make it to El Salvador, the region of Morazán in the sparsely populated mountainous north east of the country is an unmissable destination.  Close to the border with Honduras this zone was a former guerilla stronghold.  The recent history is turbulent and sad.  The people couldn’t be more welcoming. 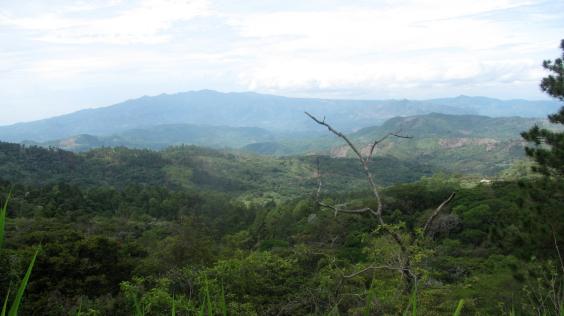 I rolled into Perquin , the capital of the region on a rickety old American school bus just as dusk was enveloping the picturesque and tranquil village.  Being my first day in the country ( I spent a joyous day making various bus connections starting from Honduras’ capital Tegucigalpa) I felt almost obligated to sample the favourite traditional Salvadoran snack – pupusas:  fried tortillas stuffed with cheese and kidney beans (or various other ingredients).  Content to be on foot after a long day of chicken bus journeying I sought out a pupusa place, took a seat, placed my order and leaned up against the wall.  I ate.  I was not disappointed. 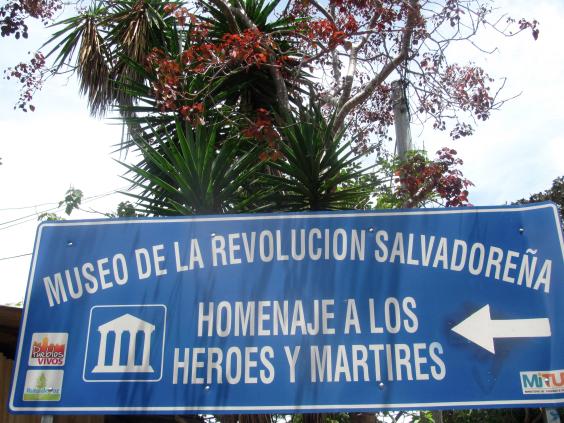 After visiting the museum and climbing the nearby ‘Cerro Perquin’ (Perquin Hill) I was sitting down after asking around about the transport options to visit El Mozote- the scene of the worst wartime attrocity.  I was  pondering and contemplating the scenario when I was approached by some El Salvadoran folk and we got talking.  As it turned out they were part of a bus tour group from San Salvador.  Their next stop was El Mozote and they assured me that I would be a welcome addition to the crew.  They were not wrong.

I was immediately adopted by the group of friendly El Salvadorans.  First peppered with questions- De dónde eres? Qué haces aqui? No tienes hambre? (Where are you from? What are you doing here?  Aren’t you hungry), then peppered with sandwiches, then fruit, we rode along in a happier disposition, recovering gradually from the sombre sentiment inflicted upon us by the museum visit.

However, arrival at El Mozote was the brink of another deep dip into the barbarity of war.  In December 1981 up to 1000 civilians, including high numbers of children and women, were brutally killed by the El Salvadoran national armed forces for allegedly sympathising and/or collaborating with the rebels.  The memorial depicting shadows of a deceased family in front of the names of the other slaughtered victims is poignant.  I sensed the whole area, now almost ghost-town like, to have an eerie presence. 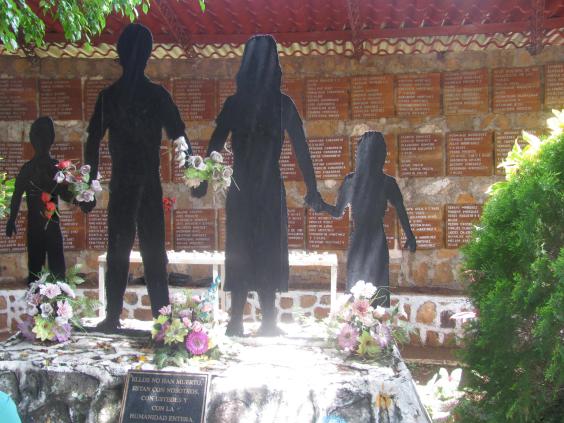 Back on the bus we continued through mountainous verdancy on undulating roads.  We somehow made it down a rough dirt track to picnic by a swimabble river.  After dunking and dousing myself in the river I was again spoiled by the vast hospitality of my new companions whilst sitting in the beating sun.

Later I was dropped at a crossroads  to hike a few miles back into town.  I settled into a steady rhythm with a lot to contemplate.  Further privy to some of the traumatic history, bucolic glamour and generous hospitality of the kind folk that people this ‘pulgarcito’ I could only wish for lasting peace for these kind and resilient people. 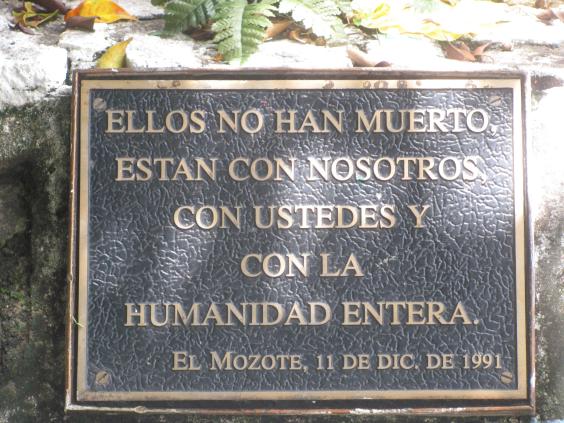 THEY HAVE NOT DIED

THEY ARE WITH US, WITH YOU AND