Below is a translation from the Portuguese of an article from Brazilian newspaper Folha de  São Paulo.  The article was written by Tatiana Freitas.  This is actually my first ever translation from Portuguese, a language that I don´t actually know as such but can largely understand – at least in its written form – because of its similarity to Spanish.  My aim is to continue to complete translations from Portuguese to English to continue to build my Portuguese understanding.  I did spend around 2 months in Brazil in 2010, where I was first introduced to the Portuguese language and the national drink, the caipirinha of which cachaca is the key ingredient.  You can read about my experience travelling by boat on the Amazon River here. 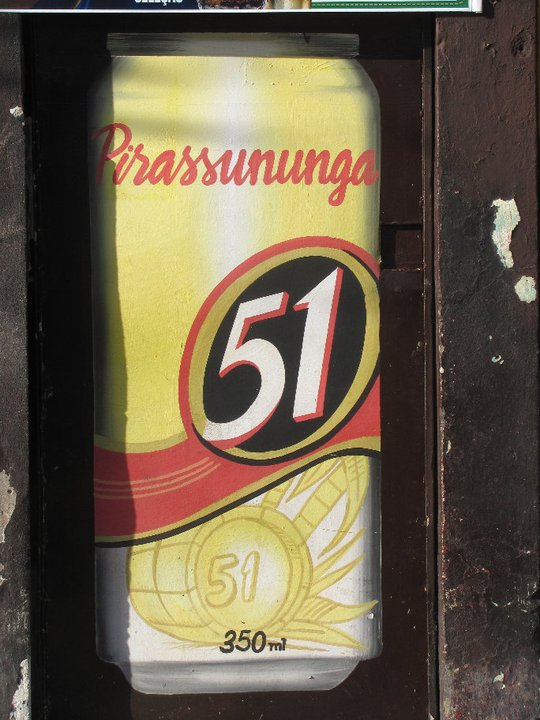 After 500 years, reached in 2016, cachaça still hasn´t found its place in the international market and, in recent years has been struggling to maintain growth and prominence in the liquor industry.

First produced in Itamaracá in the Brazilian state of Pernambuco in 1516,  cachaça has taken a nose dive (voo de galinha – chicken flight in Brazilian Portuguese) in export sales.

According to producers, despite the United States (the second largest importer) having officially recognised  cachaça as authentically Brazilian,the beverage hasn´t taken off abroad due to a lack of investment in promotion.

¨Exports grew in previous years because Brazil was in fashion but the product is virtually unknown out there¨, says Maria das Vitórias Cavalcanti, the Internationa Relations Director of Pitú, one of the biggest exporters in the country.  Just 1.2 % of the company´s sales are abroad.

Sales peaked in 2014 when the Copa do Brasil stimulated interest in the liquor, but the industry hasn´t been able to maintain that result even with a favourable exchange rate.

¨To be a global player, it is necessary to invest¨, says Cesar de Costa Rosa, the president of Velho Barreiro, where exports represent 3 % of their business.  Company research shows that an investment of $110 USD for each point of sale is required for the spirit to begin to participate in the global distilled drinks market.

¨The industry, on its own, doesn´t have the funds to do that¨, he affirms.

Brazil produces 800 million litres of cachaca per year, or 4 % of the global distilled drinks market, according to Euromonitor.  Exports don´t reach 2 % of the total production.

Cachaca branded as ¨branquinha¨ is purely for making caipirinhas and has little added value.  More than half is exported in bulk and there are few producers of aged liquor that focus on the foreign market.

One that does is Weber Haus from Rio Grande do Sul.  About 35 % of the income of the company, which is focused on the premium and organic sector, comes from exports.  Evandro Weber, the company´s social director says that ¨the sector is still being discovered by the world.  We´re working to market cachaca as another option.

Although they recognise the recent efforts of Apex (Export Promotion Agency), companies say that more needs to be done.  They argue that the government needs to put on a cachaca shirt and promote it as a typical national product.

Criticisms relate not only to the promotion of the liquor abroad but also to a taxation system that encourages informality in the sector and, according to Ibrac (Brazillian Cachaca Institute) covers 85 % of the products.

In regards to foreign trade, Apex states that there has been little time for their actions to turn into sales – the agency´s work with the sector started in 2012.

According to Cristiano Braga, Apex´s export manager, the government has invested $5 million reals in recent years to promote cachaca.  He adds that money isn´t everything, ¨expansion also depends on the organisation capacity of the sector¨.

Tequila from Mexico, which has export sales of more than $US 1 billion per year, is cited as an example by producers.

The president of Ibrac, Carlos Lima, says that the advancement of the liquor is related to the organisation of the sector.  ¨The government of Mexico granted autonomy to the regulator board of Tequila, a private institution that finances itself.  We need something similar.¨

The sector´s main complaint today is taxation.  In December there was an increase to the IPI (sales tax) from $2.90 reals per litre to 25 % of the final value of the product.

This measure primarily affects the premium market.  The IPI on a $50 real bottle has increased from $2.90 reals to $12.50 reals.  Weber says that ¨we are going to have to reduce production and personnel and stop investment.

According to Lima, the tax rise could hinder the development of the sector, the only one in the country that has been growing.  In 2015, up to August total cachaca sales fell 4 % by volume, according to Neilsen.  In value, there was a 7 % increase. ¨It´s a sign that the public is placing greater value on quality¨, says cachaca expert Jairo Martins.

10 Myths and Truths about Cachaça

1.  Cachaça and aguardiente are the same drink.

2. To be considered cachaça, the liquor must be produced in Brazil.

3.  Cachaça was invented in Minas Gerais.

Myth.  It is difficult to precisely confirm where and when cachaça was first made but there are two accepted hypotheses; in 1516 in a mill in Itamaracá, Penambuco or in São Vicente, São Paulo in 1532.  In MInas Gerais, cachaça proliferated after the gold rush.

4.  Cachaça should be drunk in small sips.

True.  Cachaça should be drunk in small sips and, in order to appreciate the flavour, should be washed around the mouth before being swallowed.  To maintain body hydration and avoid undesirable headaches,  cachaça should be mixed with water.

5.  Cachaça should be served in a glass tumbler

A glass tumbler allows the connoisseur to see the oiliness of the liquor by spinning the contents of the glass.  If it falls quickly back into the glass, that means that there is a lot of water in the cachaça and therefore is not well made.  Another tip to evaluate the quality of the cachaça before drinking is to smell the aroma of the liquor.  It should not be offensive to the drinker.

6.  The colour of the liquor is a sign of its quality

Myth.  The colour of cachaça varies according to the type and tones of the wood in which it was aged.  All cachaça, shortly after the production process is ¨branquinha¨, in other words colourless.

Myth.  The perception of the quality of the cachaça depends on the drinker.  The longer the cachaça remains in the wooden barrel, the greater the complexity of flavour will be.  However, according to specialists, there are many white cachaças that lose nothing in quality compared to others.

8.  Cachaça has an indefinite shelf life

True.  The alcohol content at a minimum of 38 % is sufficient to conserve cachaça for an indefinite period of time, as long as the bottle is well sealed.

True.  The liquor consumes the body´s glucose which opens up space for food.

10.  Cachaça with honey helps to cure the flu

Myth.  No scientific study supports that although there is anecdotal evidence that it does help to combat influenza.  It was no accident that caipirinha was created during the Spanish Influenza to accompany a home remedy made from honey, lemon and garlic.